The Catholic Church in Australia is divided into seven geographical Archdioceses which embrace twenty-one smaller Dioceses. Each Archdiocese and its smaller dioceses are grouped into Provinces. 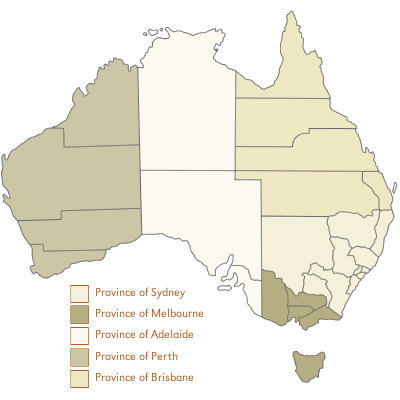 Each Diocese is under the authority of its Bishop with each of the seven major provincial dioceses called an Archdiocese and its leader designated as an Archbishop. Archbishops often have other auxiliary Bishops.

There are seven other administrative non-geographical sections of the Church - the Chaldean, Maronite, Melkite, Syro Malabar and Ukrainian Rites, the Military Ordinariate, which is responsible for those in the Australian Defence Forces, and the Personal Ordinariate of Our Lady of the Southern Cross.

The Archbishops, Bishops and the leaders of the five non-geographical sections constitute the Australian Catholic Bishops Conference.

Provinces and Metropolitans
A province is a grouping of several neighbouring dioceses, formed to promote common pastoral action in the region. The senior diocese is known as metropolitan, the others as suffragan. The bishop of the senior diocese is also known as the Metropolitan and has certain limited functions, but no powers of governance outside his own diocese.In Australia, there are five provinces: Adelaide, Brisbane, Melbourne, Perth and Sydney. These roughly correspond to state boundaries, which, among other considerations, enables the bishops to cooperate in matters involving that level of secular government.